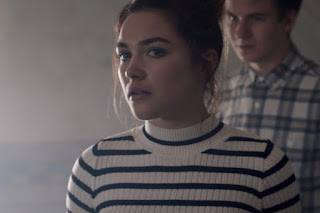 It's 1986 for some reason, and a team of paranormal investigators are making a big name for themselves all over Scotland.  But they're liars! We see them "cleanse" a home to help a grieving widower and his little girl, making sure to let him know who to give the check to.

Black Widow's little sister Florence Pugh is the star of the show as the team psychic; she minces around the house and "feels" things.  But she's a liar too! And she doesn't even know it!  Right at the end of the scam job she sees something... off, and it's a standout scene because of what isn't there -- there's no keyboard mashing music cue.  ARE YOU LISTENING JAMES WAN

It's a great moment, and soon there's another vision that is quiet, out of the corner of the eye, and never spoken of.  Teen Black Widow is in a weird spot: she's too scared to pretend to see ghosts because she's actually seeing ghosts.  I'm already a fan of "we're scamming people into believing in the supernatural AH IT'S REAL" plots, and even more a fan of "Oh gosh no, my so-called 'powers' are all fake, ha ha ha AH IT'S REAL" plots.

In the prologue of the graphic novel From Hell, two old, well-dressed duffers are walking on the English seaside, reminiscing.  It's revealed one of the old men got rich as an amazingly popular stage act in which he had fits and fell down and uttered garbled visions of the future.  This comes up because he's admitting to his friend that it was all a complete act -- he faked the whole thing and just said whatever random stuff occurred to him at the time.  "But," says the friend, "Everything you predicted, all of it -- it all came true."

So cool, right?  Or remember when Illeana Douglas hypnotizes Kevin Bacon at that party in (warning crap title) Stir of Echoes? Later he's all "hey man you unlocked psychic powers" and she's all "yeah I read half a book" or something.  Sometimes these accidental, home-grown brushes with The Beyond really work for me.

Back in the movie I'm supposed to be talking about, the gang gets a gig out in the boondocks, and I don't really need to get into the plot further but a bad time is had by all.  Things aren't what they seem, yadda yadda, eek watch out, badda bing, we gotta get out of here, bomp ba domp ba doo. If I sound a little disappointed it's because those hints of originality at the beginning didn't really play out like I hoped.

The unspooling story isn't flawed per se; it doesn't drag, and the cast does a great job of making you care about them, but some of you more experienced viewers might find this a bit paint-by-numbers.  I thought it was giving it a good honest try, like when Teen Widow's jerk older brother, who runs the scam and is in too deep with loan sharks to refuse work, keeps listening to motivational tapes on his Walkman.  You hate him but you like him.

So to the connoisseurs, I recommend watching Malevolent just for these few standout touches.  It's exactly for this reason I gave it the half star over base average.  But in the larger scheme of things it lands squarely in the populous land of known as You'll Be Okay Throwing 90 Minutes At This But It Won't Change Your Life.

i find your willingness to spend so much time talking about other movies reassuring, because one of the reasons i've been stuck for a few weeks is that i can think of almost nothing to say about Black Cat; so maybe i'll just write some other shit and give BC the *** i was already planning on.

Yeah it was kind of hard thinking of what to say about this one. It's not offensive and not even totally meh boring, but still fails to register on some level.